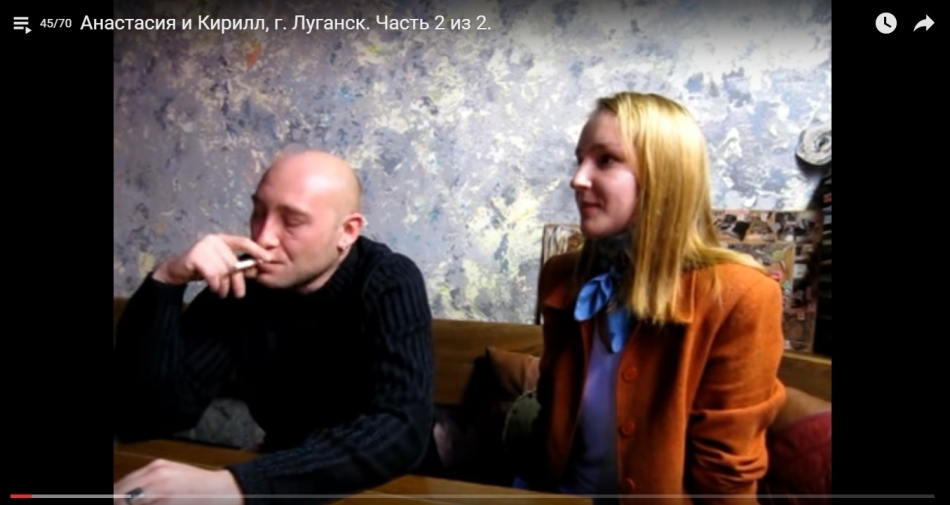 Video «Luhansk’s cultural life» as part of a project «Ukraine Speaking» (initiated by an IT-company from Kharkiv called Stella Systems) was shot in 2010. The project’s aim was to show the real Ukraine through the faces of its citizens and trace the history of the state’s modernity. This video was designed as an amateur unprofessional project. «I love my country so much, tells Kyrylo. When I see these wheat coloured fields, this is Ukraine. It is also terricones and beautiful girls. […] it is also the huge hospitality. I am a bit distressed for Ukraine, - tells Anastasiya. – hereHere people are kind people, but there is some disagreement. Maybe the independence was not needed . bBecause being in USSR people hads one common aim. This is crucial for a state. And Aafter [the collapse of the USSR] the need to strive for something, to suffer for something, it disappeared. Everybody is now on their ownhas become on its own. I love my country and will never betray it, never leave it, although I feel sad because of that. I start to draw the example for myself from my country and start concentrating more on my personal problems…».