The project of «Luhansk – city and vocabulary» 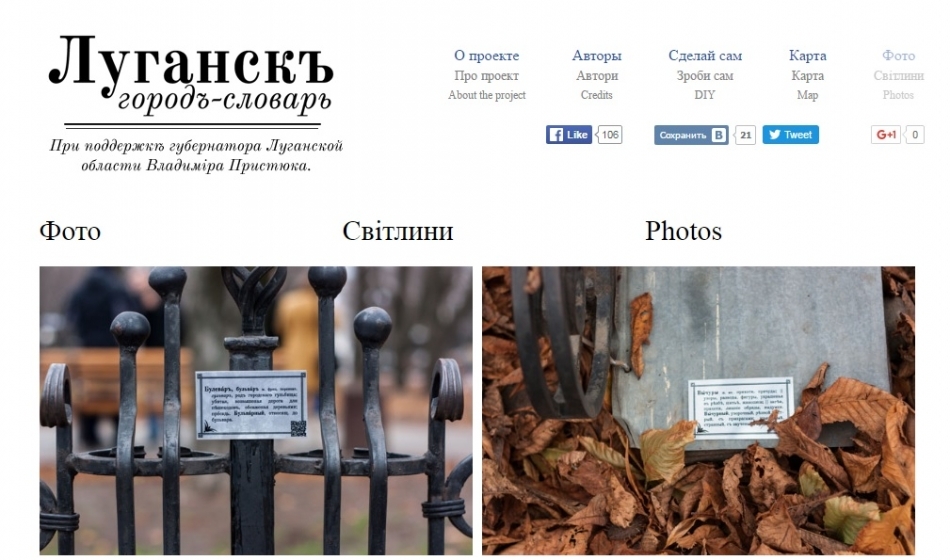 «Luhansk – city and vocabulary» is a social, educational, and art project dedicated to the 150th anniversary of the 1st edition of The Explanatory Dictionary of the Living Great Russian Language commonly known as Dahl's Explanatory Dictionary composed by Vladimir Dal, the famous native of Luhansk. «The modern city receives dictionary articles written 150 years ago. They mark the relevant objects in the modern Luhansk. The city itself becomes a dictionary and a museum, where two time periods coexist simultaneously. The objects that surround us get names […] and The Dictionary of the Living Language becomes really live dictionary, obtains a body and goes on to the streets», - such a description of the project can bewe can reaad inat its 3-languages (Ukrainian, Russian, English) on the webpage. Writing about the project’s idea its authors remembered Adam, the first human, the philosopher Ludwig Wittgenstein and the linguist Benjamin Lee Whorf. The content of the project lies in creating the tablets with the dictionary’s articles and placing them on the relevant objects. For instance, the tablet “Adam’s bones” appeared on the wall of The Local History Museum, the tablet “wardrobe” – on the wall of the theatre. Everybody could make the tablet by a template suggested at the project’s web page. The project of «Luhansk – city and vocabulary» was realized with support from Luhansk oblast Governor, Volodymyr Prystyuk.